The @ character is the symbol of the internet age, crucial for emails and social networking. But no-one really knows where it came from.

The „at sign” was once an obscure symbol known only to book-keepers. That changed thanks to Ray Tomlinson, the man widely regarded as the inventor of the email.

He plucked it from his keyboard in 1971 to go between the user name and destination address when sending a message between two computers in his office. Tomlinson chose @ because it was then rarely used in computing, so wouldn’t confuse early programs or operating systems. In a happy coincidence, the English name of the symbol was already „at”.

„The @ symbol appeared on typewriters before the end of the 19th Century,” says Keith Houston, author of Shady Characters: Secret Life of Punctuation. „It seemed to be a general symbol that meant to readers ‚this is this many items at this price’. It didn’t have a use beyond this.”

As typewriters had it, so did the first proper keyboards for computers.

„The @ symbol made it on to keyboards because it was a business tool and had a business use,” says Houston.

Those business users understood it as a symbol to indicate unit price eg 12 batteries @ £1 each.

In 2000, the Italian academic Giorgio Stabile observed that many nations use different words for the @ symbol that describe how it looks. In Turkish it means „rose”, while in Norwegian it means „pig’s tail”. In Greek it is „duckling„, while in Hungarian it is „worm”.

But Stabile noticed in French, Spanish and Portuguese, it referred to arobase or arroba – a unit of weight and volume. In Italian the name for the symbol was „amphora„, referring to long-necked pottery storage jars that had been used since ancient times.

Stabile discovered a letter sent from Seville to Rome in 1536, which discussed the arrival in Spain of three ships sailing from the New World. It stated that an amphora of wine was sold and „amphora” was replaced with the @ symbol as an abbreviation. Stabile concluded the @ symbol was a common medieval shorthand for units of measure in southern Europe, even if the precise units differed. 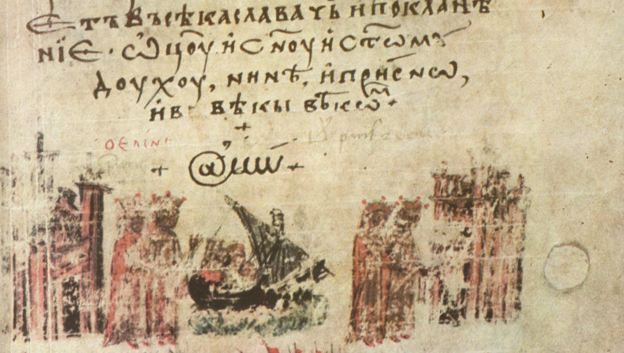 Spanish journalist Jorge Romance then found an even earlier use. „I read about the 16th Century example of @ and remembered I had seen the symbol before when I was a history student at the University of Zaragoza. I went through my old papers and found customs records between Aragon and Castile in the 15th Century. It meant ‚arroba’ as a weight measure, and in this instance one arroba of wheat.”

But the earliest yet discovered reference to the @ symbol is a religious one. It features in a 1345 Bulgarian translation of a Greek chronicle. Held today in the Vatican Apostolic Library, it features the @ symbol in place of the A in the word Amen. Why it was used in this context is a mystery.

It seems fitting then that the first email to be sent with the @ symbol has also been lost to time. When Tomlinson sent the first message to tomlinson@bbn.tenexa, he didn’t realise what a game-changer it would be and so didn’t bother writing it down.

World’s first robotic kitchen unveiled (text + video)
Here’s what happens to your body when you eat a slice of pizza
Neuroscientists Discover Most Relaxing Song
Why do we risk it?
Mad as a hatter or geniuses at work?
Scientists can now record and show you your dreams (text + video)
Are you hooked?
Poland lurches to right with election of Law and Justice party
Why bad guys win at work?