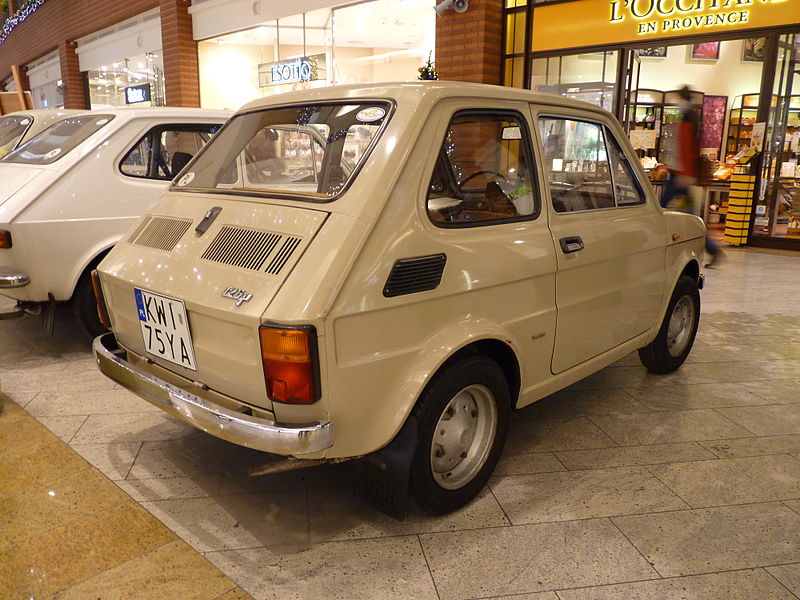 The 126 used much of the same mechanical underpinnings and layout as its Fiat 500 rear-engined predecessor with which it shared its wheelbase, but featured an all new bodyshell closely resembling a scaled-down Fiat 127.

In Italy, the car was produced in the plants of Cassino and Termini Imerese until 1979. By this time 1,352,912 of the cars had been produced in Italy.

The car continued however to be manufactured by FSM in Poland, where it was produced from 1973 to 2000 as the Polski Fiat 126p. Even after the introduction of the 126 Bis (a 126p with water-cooled 704 cc engine of indigenous Polish construction), the original model continued to be produced for the Polish market. The car was also produced under licence by Zastava in Yugoslavia. In 1984, the 126 received a facelift, giving it plastic bumpers (for all versions) and a new dashboard. This model named Fiat 126p FL. In 1994, the 126p received another facelift, and some parts from the Fiat Cinquecento, this version was named 126 EL. The 126 ELX introduced a catalytic converter.

The car was produced in Poland under the brand Polski Fiat 126p (literally in English: Polish Fiat 126p) between 1973 and 2000. At first it was almost identical with the basic model: differences included a higher chassis, a modified grille on the back, and the front blinkers that were white in Italy but orange for other markets. To distinguish it from the original Italian car, the letter „p” was added to its name. It was produced by Fabryka Samochodów Małolitrażowych (FSM) in Bielsko-Biała and Tychy under Italian Fiat licence. Throughout the 1980s the 126p was continuously modified. First it received upgraded brakes and new wheels from Italian Fiat, hazard blinkers were added to meet new law requirements, in 1985 tail fog light and factory back-up light were added to then standard plastic bumpers, an electronic ignition system and alternator replaced undersized generator around 1987. The factory battery in 126p had only 35 Amp-hour capacity which combined with undersized generator resulted in never fully charged battery unless someone drove the car without stopping for extended time period. Some owners upgraded to a 45 Amp-hour battery from Fiat 125p (1.5 Liter engine) to improve the cold start reliability. Due to a relatively low price it was very popular in Poland and was arguably the most popular car there in the 1980s. Its very small size gave it the nickname maluch („the small one”,”small child”, pronounced [ˈmalux]). The nickname became so popular that in 1997 it was accepted by the producer as the official name of the car.

It was exported to many Eastern Bloc countries and for several years it was one of the most popular cars in Poland and in Hungary as well. It also found a minor market in Australia between 1989 and 1992, under the name FSM Niki. During that period it was Australia’s cheapest car. There was a convertible version developed for Australian market.

Throughout the 1980s there were several experimental prototypes developed in Poland. A cargo version called „Bombel” (literally can mean „a bubble” but referred to a familial and alternative term for „small child”) for its fiberglass bubble shaped cargo enclosure, an off road version propelled by caterpillar tracks and a front wheel drive, front engine, with longer front end and flat cargo area in the rear where the original 126 had engine. The rear of this prototype was similar to the 126 Bis which also had a rear hatch for accessing the cargo space above the flat water-cooled engine hidden in the floor. There was also an attempt at installing a small diesel engine (due to gasoline rationing) in the classic 126p body. It is also a popular platform for electric engine and motorcycle engine swaps .